Why are people waiting in line for more than an hour for ice cream in Philly?

Why are people waiting in line for more than an hour for ice cream in Philly?

Sweet Charlie’s made-to-order rolled ice cream is a hit with customers, some of whom wait more than an hour for their frozen treat.

Every day this summer, a line has spilled out of the small ice cream shop, down the front steps, and along the sidewalk on the north side of Walnut Street across from Washington Square.

Saturday was no different, as dozens waited in the heat for their $7 frozen treat.

Like Black Friday shoppers angling for the doors to open, they waited.

Like a group of sneakerheads minutes before a big shoe drop, they waited.
Like concertgoers eager to nab tickets, they waited.But here, in the 700 block of Walnut Street, they waited for a cup of Sweet Charlie’s Thai rolled ice cream — Philadelphia’s hottest cold thing this summer.

One customer, happily taking in spoonfuls of her sweet treat, said the wait had been relatively short. Maybe 20 minutes, she estimated.

Wrong! Her friends quickly corrected her: “It’s 5 o’clock,” they said. They had arrived at 4.

Angel Mariscal, 20, and Melissa Guerra, 22, both of Norristown, joined the line at 4:53. When they finally walked out of Sweet Charlie’s, ice cream cups in hand, it was 6:23.

“I feel like I’ve been here forever,” Guerra complained.

But overall, customers said the long queues, the heat, the boredom, the standing packed with strangers, were all worth it to get a taste of something new on a block that is also home to the trendy sushi restaurant Fat Salmon and burrito spot El Fuego.

Inside tiny Sweet Charlie’s, workers pour a liquid “proprietary dairy” ice cream or yogurt base resembling a slightly thick milk on four cold, stainless steel surfaces. They work it around with metal scrapers until the liquid starts to solidify. Per customers’ orders, fruits, candy, and other ingredients are mixed in to make flavors such as Wonder-filled (Oreos), Namaste (strawberry cheesecake), and LOVE Park (chocolate, pretzels, and peanut butter). 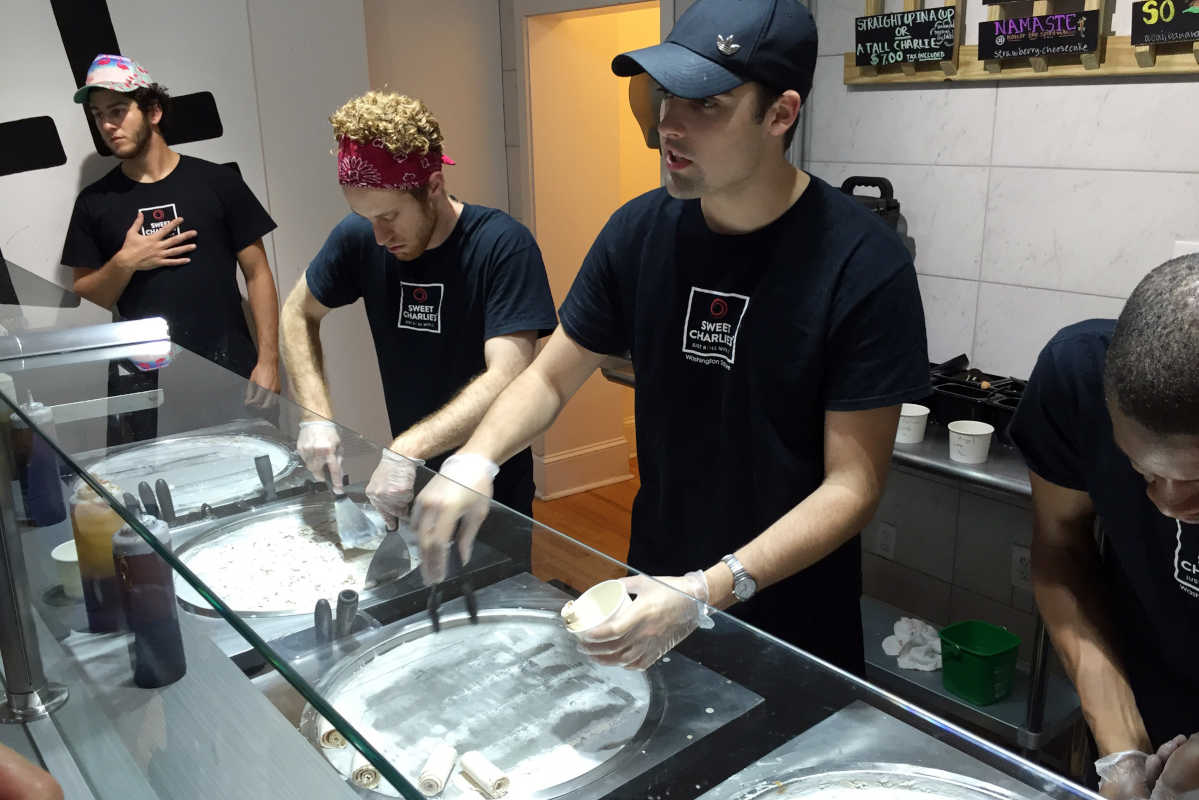 Each dessert also includes an unlimited number of toppings — blueberries, honey, doughnut bits, among them.

“Four-and-a-half stars,” declared Virginia Hoyt, 22, of Kentucky, as she ate her Death by Chocolate, a mix of chocolate chips, chocolate drizzle, and brownie bites. (On top, she added whipped cream and rainbow sprinkles.)

“I think it’s cool I get to watch, and then I think it tastes good,” she said.

Her friends — all fellow alumni of Lafayette College in Easton — agreed with Hoyt’s assessment. Four of them came to town to visit their friend Lara Ruggerio, 23, who had wanted to try Sweet Charlie’s since seeing the rolled ice cream trend explode out of nowhere in her Facebook feed.

“We have tons of friends in New York City who had been, and it looked really cool, and I figured, if we had the afternoon and it’s hot enough, and we’re just going to hang out and chat anyway … ,” Ruggerio said, shrugging.

The group had just come from Independence Beer Garden, which debuted in 2014 to equally huge buzz and giant crowds.

“So it was a very fun, Philly afternoon,” Ruggerio said.

The five college friends said their hour-long Sweet Charlie’s wait was worth it. “It’s an experience,” Ruggerio said. But not one they’d likely repeat, the friends said, unless the lines get shorter.

“It’s kind of like a museum,” said Phoebe Wilks, 22, of Connecticut. “You wouldn’t go to a museum over and over again, but it’s kind of a cool thing to do every once in a while.” 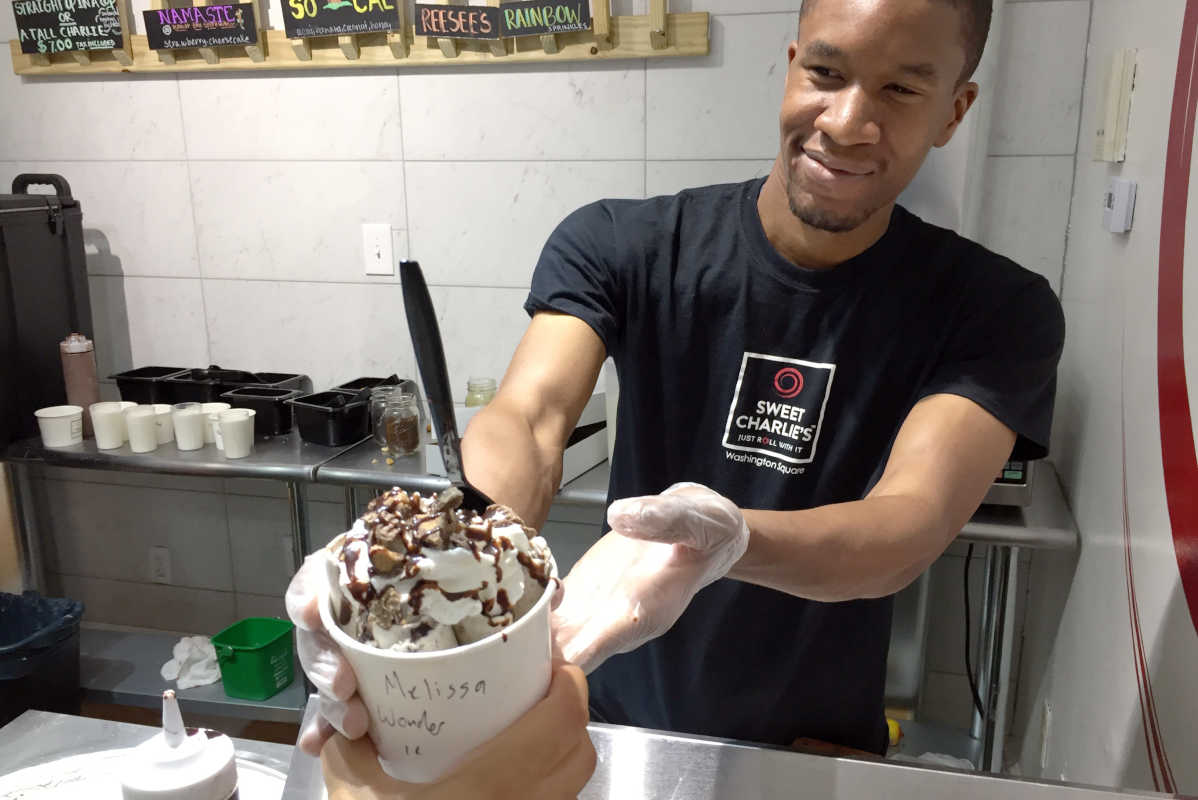 At the helm of this dessert jackpot? A 19-year-old from Cherry Hill.

Kyle Billig, who started Sweet Charlie’s with his brother, Jacob, said he hadn’t expected the huge response when he decided to open one of the city’s first rolled ice cream shops.

After seeing a video on Facebook last year — even the shop itself is a product of the sweet’s social-media sensation — Billig, then a freshman studying business entrepreneurship at Arizona State University, decided to get what schools call “applied learning.”

After some trial and error, he figured out his plan and rushed to open the shop at 711 Walnut St. on Memorial Day weekend.

“We figured we weren’t totally ready to open in that we didn’t have a full staff, we didn’t have all the kinks rolled out, so we said, ‘You know, we’ll open, people would trickle in, we won’t tell anyone we’re open,’ ” Billig said. “We’ll take that time to kind of work the kinks out and get everything under control.”

Their first customer was someone who worked in the area, who then went back to her office and told others. Suddenly, word spread.

“Then we just got mobbed. And ever since then, it’s just been crazy, so we never really got that little grace period to work everything out, which I think was kind of like a blessing in disguise,” Billig said, “because it kind of forced us to get everything right really quick.”

As the cold confection has heated up across social media, Billig moved quickly to open a second location, in Rehoboth, Del. He’s now looking for other spots, eyeing Rittenhouse Square, and is hoping to franchise new stores.

“We’re looking to just go everywhere,” he said Saturday, as 50 customers waited to be served. “The trend is really hot right now, so we’re looking to take advantage while we can.

“The trend is crazy,” he said. “It could be the next frozen yogurt. Who knows?”